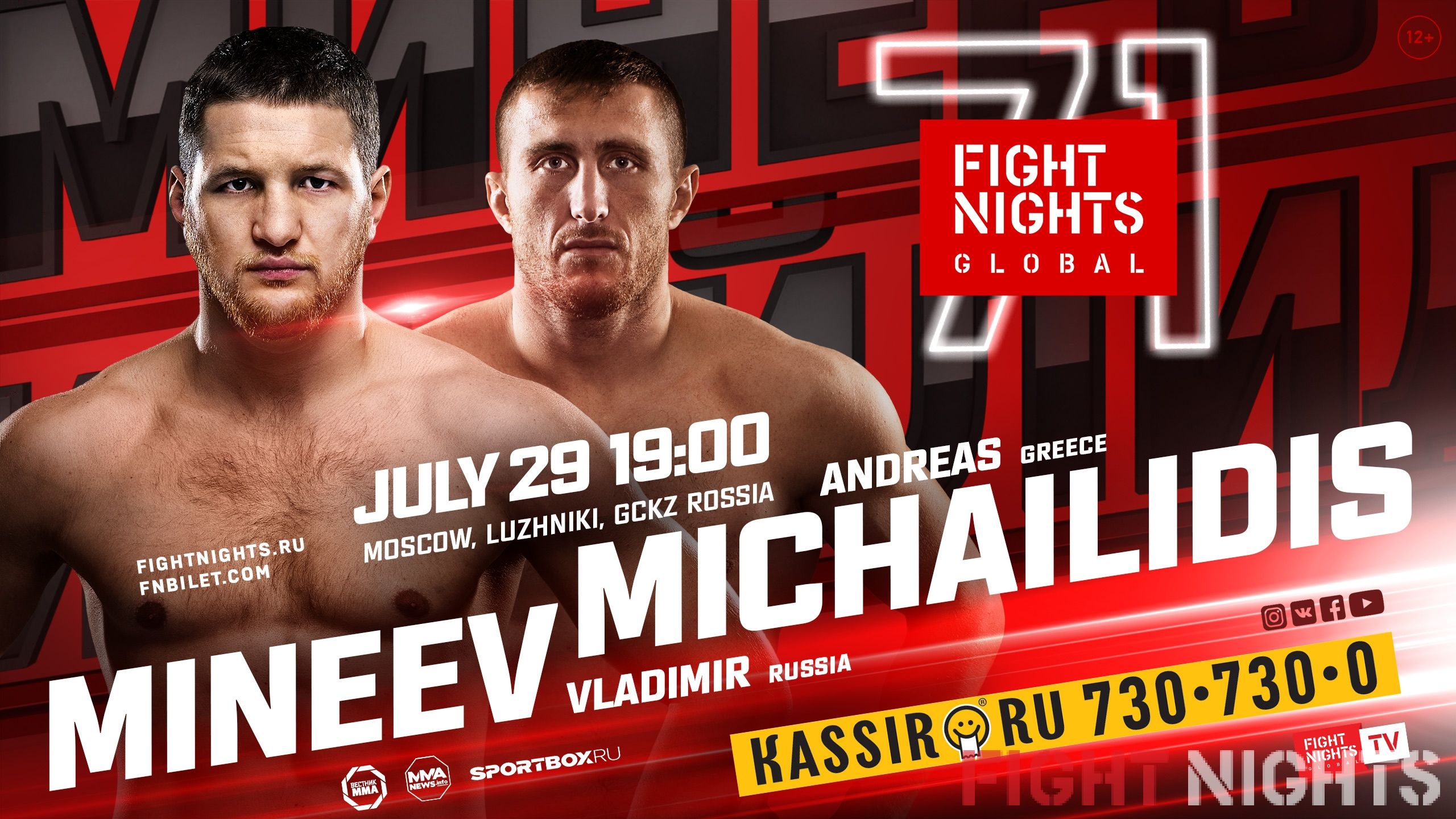 FIGHT NIGHTS GLOBAL is coming back to Moscow!

Vladimir Mineev (9-1) revenged his only defeat by a confident victory in the rematch against Maiquel Falcao. Eight of nine wins "Volzhanin" won early, justifying the hopes that are put on him. Most likely, the highly anticipated Russian MMA match-up, Mineev against Magomed Ismailov will happen this fall. So FIGHT NIGHTS GLOBAL 71 has a special meaning for Vladimir as he would prefer not to lose before the most important fight in his career...

Faycal Hucin, who was slated for the main event of FIGHT NIGHTS GLOBAL 71 (July 29, Moscow), is injured and can't take part in the fight against Vladimir Mineev. Andreas Michailidis from Greece will substitute the French athlete.

The Greek is a familiar face to MMA fans in Russia; he defeated two of our native soldiers: Arbi Madaev of "Ahmad" promotion (WFCA) and Kudo world champion Evgeny Shalomaev. Both victories were round one TKOs. Andreas is 11 fights and 9 wins in pro MMA. Michailidis is more of a “striker” but we also should notice his wrestling skills that got Shalomaev in trouble…

Abdul-Khamid Davlyatov (3-2) was given the opportunity to break into the world's top light heavyweight rating, when he stepped into the cage against the well-known Brazilian fighter Fabio Maldonado this March. Unfortunately for Davlyatov, he lost to Maldonado via TKO. But Tajik sportsman managed to give the experts a good aftertaste impression. He is considered the Great Tajik MMA Hope, which deprives him of any sympathy if he loses against Kabargin.

And Mikhail Kabargin (1-1-0) is a Primorsky Region fighter; he debuted in MMA with an even fight against Europe free-style wrestling champ Ali Isaev. The match was equal, taking in consideration the experience of Isaev, who was victorious. Mikhail’s second fight was an early victory against Sergei Kalinin. Despite a small MMA record, Kabargin desires to get to the FIGHT NIGHTS GLOBAL title in the shortest possible time. Will Mikhail make another step towards his destination point, the trophy? Or will the Tajik hero defeat the enemy on his path to glory? July 29 has the answer.

FIGHT NIGHTS GLOBAL 71 boasts a stacked card to satisfy the most refined wishes of MMA fans, such as female fights. We have the charming Liana Jojua on the ship! Fans like bouts where status is at stake. Here you go. Will the younger brother of Khabib Nurmagomedov, Omar, remain undefeated? Fans also like come backs. We got you. FIGHT NIGHTS GLOBAL lightweight Grand Prix finalist, Azerbaijan’s favorite Nariman Abbasov returns to the cage for a showdown against undefeated Dmitry Gorobets. And there is more! The light heavyweight super fight between Russian MMA champion Muslim Magomedov and St. Petersburg striker Alexey Sidorenko. Plus, we have some surprises for you; no clues, no tips, see for yourselves at FIGHT NIGHTS GLOBAL 71.

The weather forecast for Moscow says July 29 is going to be a hell of a hot day.